Two weeks ago we held the first HCWP in a while, and shortly after I started playing games with friends online. Since then, I have since purchased the Jackbox Games and have been having a blast but it's always hard to coordinate times with friends... which got me thinking. In our COVID-19 topic, I suggested that we try and get together for some games, but only suggested games we'd have to all buy. We have a fairly large/active community on our Discord and I'm going to start hosting a weekly game night of Jackbox TV. There is no game purchases necessary!

There will be no "this time doesn't work for me" type of deals, just simply drop in and drop out. I'll post in #cemetech when I'm starting up and will try my best to keep a consistent schedule, I'm aiming for Saturday evenings. Most games support an audience so even if you aren't part of the game you may be able to influence it. You do not need to buy anything to join! Merely join the voice channel so you can see the game screen then join the game on a separate device (or use a second monitor) by going to Jackbox.tv and typing the game code on the screen share.

If you'd like to participate, make sure you're a member of our Discord by following this link and clicking on the Discord logo. I'll be running the stream through the Game 1 voice chat channel.

I may record a few of these and create videos for Cemetech, I'll be sure to post in #cemetech and in #general-gaming that I'll be recording audio and the screen so that if you don't wish to be recorded, you know not to join. You'll also be able to tell because there will be a bot in the channel and user list with the name [!RECORDING].

FYI for April 25th, 2020:
I may not start this tomorrow. I have some prior plans and will likely be home after late evening, but if I get home early enough, I'll be sure to start a game! (Don't worry I am social distancing, I'm going out by myself on a drive to just see some sights other than my walls. I plan to be back about an hour after sunset).

I look forward to playing with you guys.

There are two types of people in the world: those who can extrapolate data from incomplete data
↑
Quote

Yes, good idea! I've been doing something similar with my family and friends, it's been great so far so I'll try to join whenever I can!

Great idea, comic; thanks! Since we already have HCWP blocked out for Wednesday evenings, and it's been a long time since we concentrated on just programming on HCWP, how do you feel about trying to fit a bit of Game Night time into HCWP this week? It makes scheduling a bit easier, since people already are aware of that as something they might want to attend.

Alex wrote:
Two weeks ago we held the first HCWP in a while

We held one the week before that but Kerm didn't attend because he was doing train things.

When KSP2 comes out, I'm gonna be playing it. Unlike KSP, there will be multiplayer support, so it might be interesting to try that out with other Cemetechians. KSP2 will be 60$ though, so that might be a bit of a hurdle for some.

A multiplayer KSP sounds interesting, I think I'd play it!

KermMartian wrote:
Great idea, comic; thanks! Since we already have HCWP blocked out for Wednesday evenings .... how do you feel about trying to fit a bit of Game Night time into HCWP this week?


I'd be down to do that! The beauty of Jackbox is that it can be a very impromptu game. Most games last 10-15 minutes so we can always start a game whenever and folks who join later don't have to wait long for the next round. I'll see you guys this Wednesday!


mr womp womp wrote:
Alex wrote:
Two weeks ago we held the first HCWP in a while

We held one the week before that but Kerm didn't attend because he was doing train things.

I did not know that! I just went with what Kerm wrote

Quote:
When KSP2 comes out, I'm gonna be playing it. Unlike KSP, there will be multiplayer support, so it might be interesting to try that out with other Cemetechians. KSP2 will be 60$ though, so that might be a bit of a hurdle for some.


I love playing games with people so I'd be down. I hardly play games by myself because I get bored 10 minutes in but when I play with friends I can play for hours because we make it fun. I played Golf with Your Friends for 3 hours last night.

If there's anything that's been made exceptionally clear through all this, is that my computer is the worst when it comes to games. Which I/we already knew. I can run MC, Golf with Your Friends, and a few other low poly/physics games without issue but I hit HUGE hurdles when I start to record my game play and the Mac mini also gets in the way of bigger games.

If most of these play sessions continue, I'll certainly be building a Windows desktop.

There are two types of people in the world: those who can extrapolate data from incomplete data
↑
Quote

We had an incredible time at HCWP doing game night. There were some technical difficulties, however. First Google Hangouts proved to be a tad unreliable to have quality video for the stream so we moved over to Discord where the second difficulty came when I couldn't share my computer/game audio. Thankfully, Geekboy has Jackbox as well so we were able to march onward!

I'm going to investigate the audio issue more so I can have this resolved by the weekend.

Here are some photos! 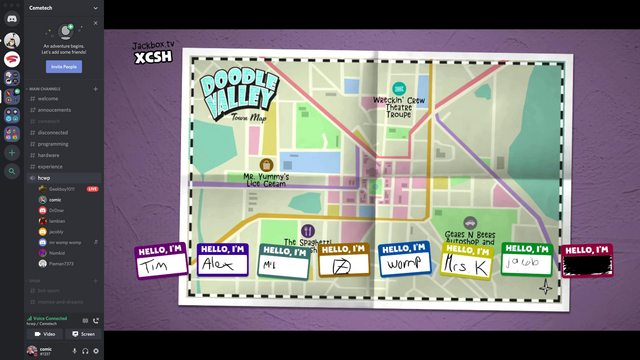 DrDnar won a game of Quiplash 2! 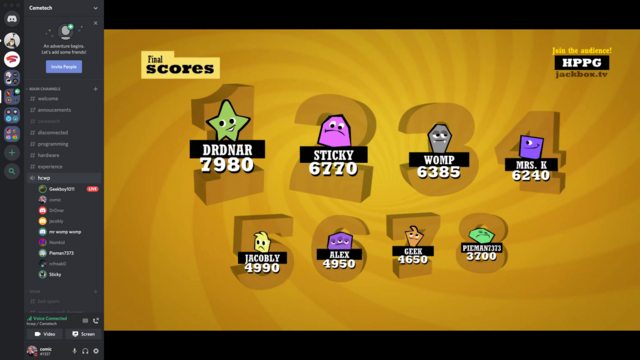 What did we name this drawing? 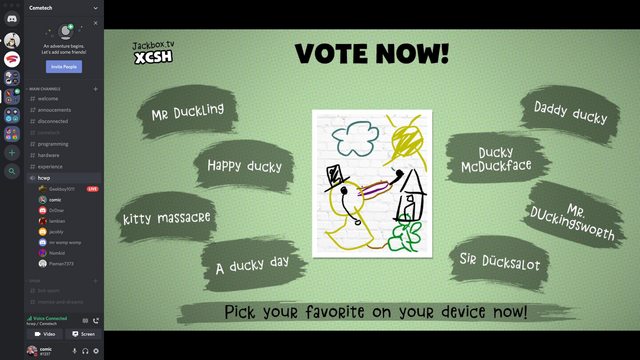 Press the Button was tons of fun with our big group. 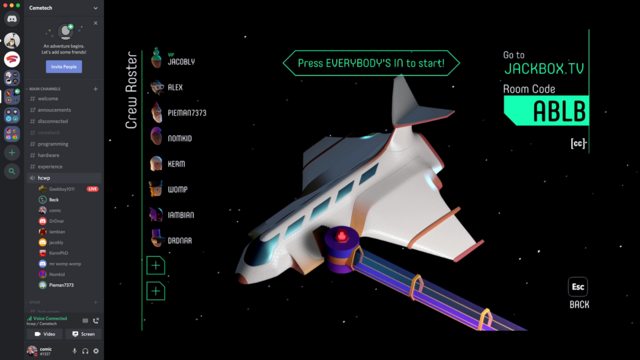 We played Fibbage (I won't link photos because the game does recycle questions, so I'd spoil the answers) and, well, we had quite a stinky theme during one of the games. Haha

There are two types of people in the world: those who can extrapolate data from incomplete data
↑
Quote
Register to Join the Conversation
Have your own thoughts to add to this or any other topic? Want to ask a question, offer a suggestion, share your own programs and projects, upload a file to the file archives, get help with calculator and computer programming, or simply chat with like-minded coders and tech and calculator enthusiasts via the site-wide AJAX SAX widget? Registration for a free Cemetech account only takes a minute.