ya me too. I would love a tournament
↑
Quote

Me too. I might not have a lot of time, but the cross country season is almost over.
↑
Quote

Lichess allows creating custom arenas, this is an option for us if we set a time and date.
Support the community by joining MyCalcs for free!
↑
Quote

To facilitate this, I have created a lichess team for cemetech members; the password for entry is the username of our site's founder. I'll manually approve users.

https://lichess.org/team/cemetech
Support the community by joining MyCalcs for free!
↑
Quote

Just for future reference, I far prefer chess.com, but I am willing to use lichess.
↑
Quote

sJRw wrote:
Just for future reference, I far prefer chess.com, but I am willing to use lichess.


lichess is completely free, in all senses so it has earned a spot in my heart.
In other news, Ive announced a tournament:


Quote:
Were going to have our very first tournament this upcoming Friday evening.

It will be an unrated 5+3 Blitz tournament and will last for 45 minutes. If this time does not work for people, send me a message, as the time is subject to change. https://lichess.org/tournament/22kvTH2u

Id love to get strong participation for this first time around, even if you arent a great chess player were sure to have fun. Feel free to join the team (details above)!
Support the community by joining MyCalcs for free!
↑
Quote

Me and most likely all europeans are not available at what for us would be 00:00. I would suggest 19:00 amsterdam, for starting times 9:00 to 14:00 in america/canada and starting times 18:00 to 21:00 in europe. Since most americans have to work at this time on fridays, I suggest doing the chess tournament either on saturday or sunday.

Any time between 1000 and 1700 mst would work for me on Friday, but I'm only available for a short period of time on Saturday.
↑
Quote

We ended up having two tournaments, one traditional blitz tournament, and one where we experimented with a Swiss tournament to reduce the time between games and improve predictability. 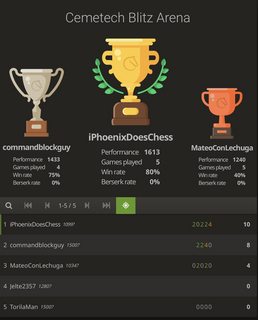 I took the win in this first tournament between myself, commandz, Mateo, and TortillaMan, though commandblockguy was hot on my heels. We played a sum total of 565 moves in 9 games that you can explore here. 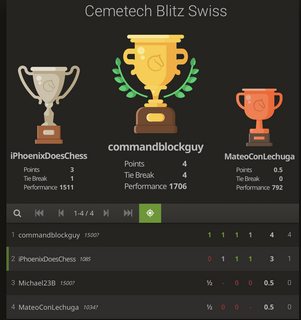 We found lichess default tournament style to be a little annoying with such few players. The Swiss system is much more predictable with regards to actually getting games to play. Myself, commandz, Mateo, and Michael2_3B played a total of 5 games, with commandz winning the tournament.

I think that in the future well stick to the Swiss tournaments. Any opinions on the matter?
Support the community by joining MyCalcs for free!
↑
Quote
Register to Join the Conversation
Have your own thoughts to add to this or any other topic? Want to ask a question, offer a suggestion, share your own programs and projects, upload a file to the file archives, get help with calculator and computer programming, or simply chat with like-minded coders and tech and calculator enthusiasts via the site-wide AJAX SAX widget? Registration for a free Cemetech account only takes a minute.