I found this topic on the steam community page which presented the following challenge:

Send a kerbal to orbit and return them safely for the lowest cost possible.

I think it would be really fun to have some challenges like this on Cemetech, feel free to attempt it and share your PBs

Some people interpreted the challenge as including the kredits you can get back from recovering the craft after landing it (which might favor SSTO designs since you recover all the parts), others as just the actual price tag in the VAB (add up the price for all the parts). I chose to attempt the latter and managed to smash the "record" on the community page (3,112₭), but that's barely an achievement given that only about 3 people attempted the challenge with the same rules. Anyways, I got down to 2,408₭, which works out to 22.6% cheaper, and I have a hard time seeing how it could go any lower without ditching the rule about having to carry a kerbal. Here is my design: 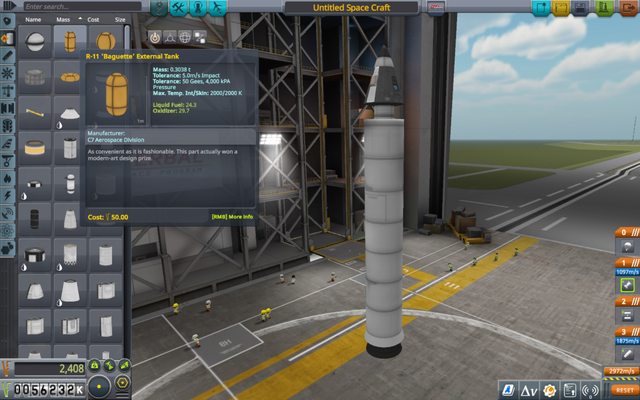 There are 2 'Baguette' Tanks (

) . I wasn't able to reach orbit with anything smaller and I doubt a different 2nd stage engine could be a source of improvement. I also use a single drogue chute (

) as the only parachute, which makes for a cozy 30m/s lithobraking, during which surprisingly, nothing exploded. This saves 92₭ over using the regular Mk16 Parachute (

Well done Womp! I may try to do this at some point. Do you think you could save a buck by replacing the command pod with the external command seat? If aerodynamics become an issue perhaps a nose cone or a storage bay with the seat inside could help fix it.

TheLastMillennial wrote:
Well done Womp! I may try to do this at some point. Do you think you could save a buck by replacing the command pod with the external command seat? If aerodynamics become an issue perhaps a nose cone or a storage bay with the seat inside could help fix it.

I actually tried this out while experimenting and I wasn't able to get it to be cheaper, I always ended up a couple hundred bucks higher than the command pod design, but it may be possible to use an ant engine with such a design which could help even out the playing field. One thing I found was that the regular 1.25m Docking Port is 20₭ cheaper than the decoupler I used, but its a little heavier. Given that I had 67m/s when I reached orbit, that might be enough of a margin to save the 20₭.

I came across this video today in which the creator attempts to reach orbit using nothing but monopropellant engines. I felt like he was making it seem a lot harder than it really was, either because he is not so good at the game or to make the video more interesting. His ship wobbled around like spaghetti and anyone who's played some KSP will know that that's a recipe for disaster. He spends half a minute explaining which tank gives you the best volumetric mass and then proceeds to ignore his results and cover his rocket with the least efficient choice on the list?
I also noticed that in the final attempt where he "succeeds", he removed over half of the payload mass by removing the ISRU unit and radiators which took the mass from 2.9T to 1.2T, making the challenge way easier.
Either way, he finished with a cost of 251,068₭ and this prompted me to try it out for myself. I chose to send the whole payload (1 small ISRU unit, 4 small radiators, 1 mk1 cockpit and 1 small drill) to orbit because I feel like it was borderline cheating on his part.
Sure enough, it was not the hardest thing in the world. I completed the challenge pretty quickly and decided to optimize my design.
The secret was to use all the engines from every stage simultaneously and set it up so that as you drop stages, you keep a decent TWR with the remaining engines.
Here is my final design: 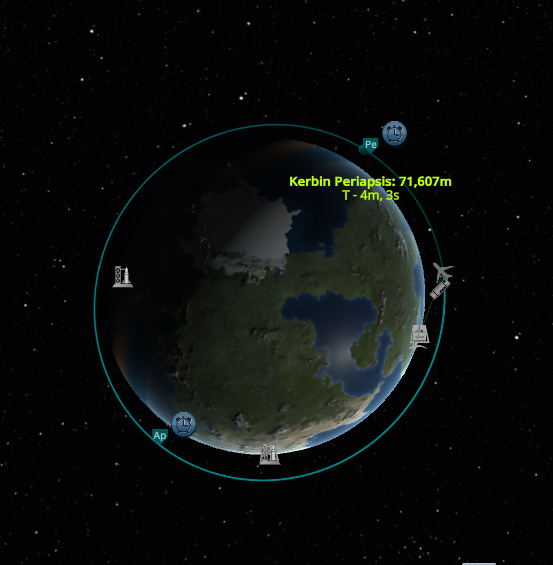 I finished with a cost of 34,192₭ and I'm sure it could be improved since I had over 200m/s remaining when I reached orbit. If you drop the requirements down to "just get a kerbal to orbit", I suspect you could get under 15,000₭.

↑
Quote
Register to Join the Conversation
Have your own thoughts to add to this or any other topic? Want to ask a question, offer a suggestion, share your own programs and projects, upload a file to the file archives, get help with calculator and computer programming, or simply chat with like-minded coders and tech and calculator enthusiasts via the site-wide AJAX SAX widget? Registration for a free Cemetech account only takes a minute.