TheLastMillennial wrote:
Whoa, how did I not know about This thread? Im (obvioisly) a big KSP fan! You can check out a few of the thinks I've made by clicking on the KerbalX in my signature. this is totally not self advertising : P


You are so excited you cannot spell!

My friend owns KSP and we'll be on a FaceTime audio call, so he'll play it like a radio announcer... "Six unwilling Kerbins were killed in a small launch pad explosion. No more research into the event will occur, because that never happened! Total Kerbin death count for today: 1430"
Support the community by joining MyCalcs for free!
↑
Quote

_iPhoenix_ wrote:
My friend owns KSP and we'll be on a FaceTime audio call, so he'll play it like a radio announcer... "Six unwilling Kerbins were killed in a small launch pad explosion. No more research into the event will occur, because that never happened! Total Kerbin death count for today: 1430"

Just for the record, since some people don't seem to know the correct terms, Also, I got a nice total eclipse while on my way to some debris that needed cleaning up using a modded Dynawing (Because the stock one barely goes anywhere at all) Not to be outdone by mr womp womp I'll post my eclipse here too. 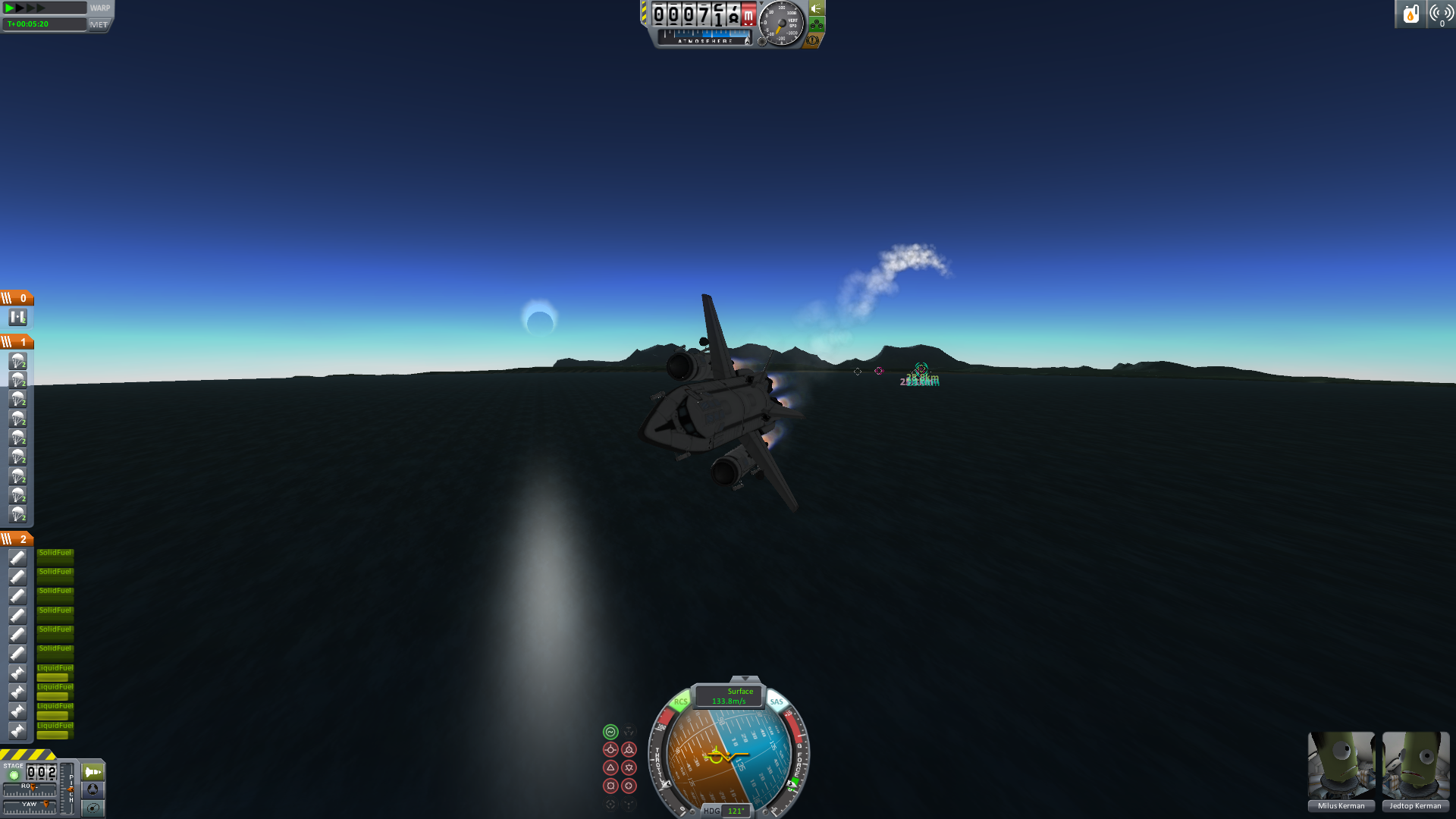 Here's my favorites of my Adventures in KSP!

Since my semester ended a couple weeks ago, I've been getting back into KSP.
I really like the funny moments in the tracking station when missions don't go to plan

For those who aren't familiar with the Kerbol system, it is essentially the equivalent of intending to go to Mars, and ending up at Io (Jupiter's moon)
Since the Kerbol system bares a lot of ressemblence to our own solar system, according to this discussion in the ksp forums.

I've also expanded my mun station, which now has a more proper Lf+Ox and Monopropellant depot. and a big ball of inflatable heat shields

.The heat shields were and absolute pain to drag out of the atmosphere, because I couldn't deflate them because I had things attached to both sides, and I obviously wanted them to be inflated once they were on the station... 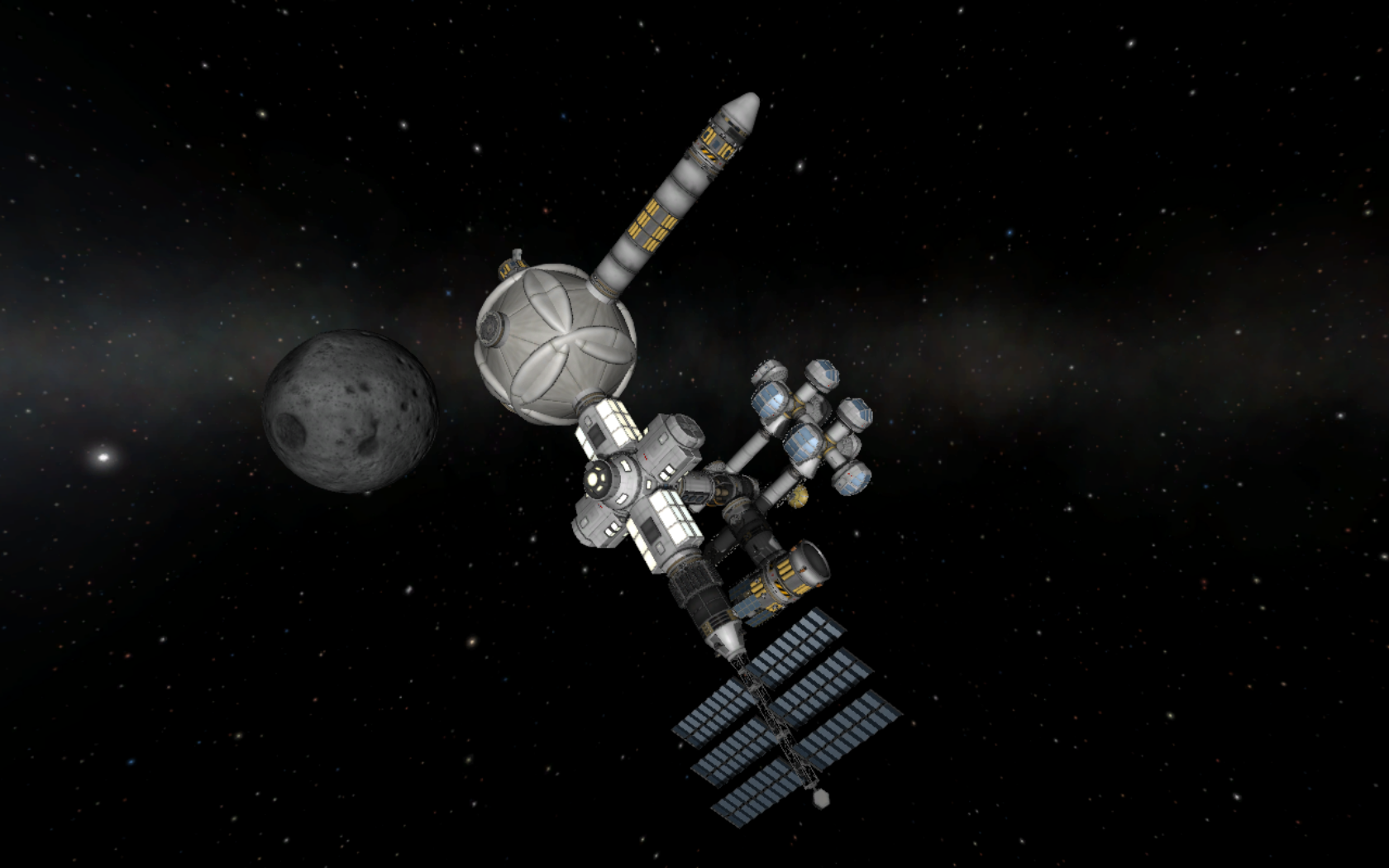 One thing I would like to do in the future is make an orbital station somewhere far away (within the last 3 planetary bodies, either Dres, Jool, or Eeloo), but of course, any new modules need a tedious mission just to reach the station. It would surely be easier to assemble it in LKO, and then fly the entire thing to the desired location, but even that sounds like a pain. Maybe building a set of smaller stations around a few of Jool's moons could be an interesting and long mission...

I went to the north pole, which is great for screenshots, because it's easy to get the sun in favorable positions (around sunrise and sunset). It's possible to see Minmus from the surface of Kerbin, although it is usually either camouflaged among the stars, or drowned out by the sun, which makes it only visible in just the right conditions. Here is a picture of Minmus, as seen from the north pole, it's the little white dot in the sky. 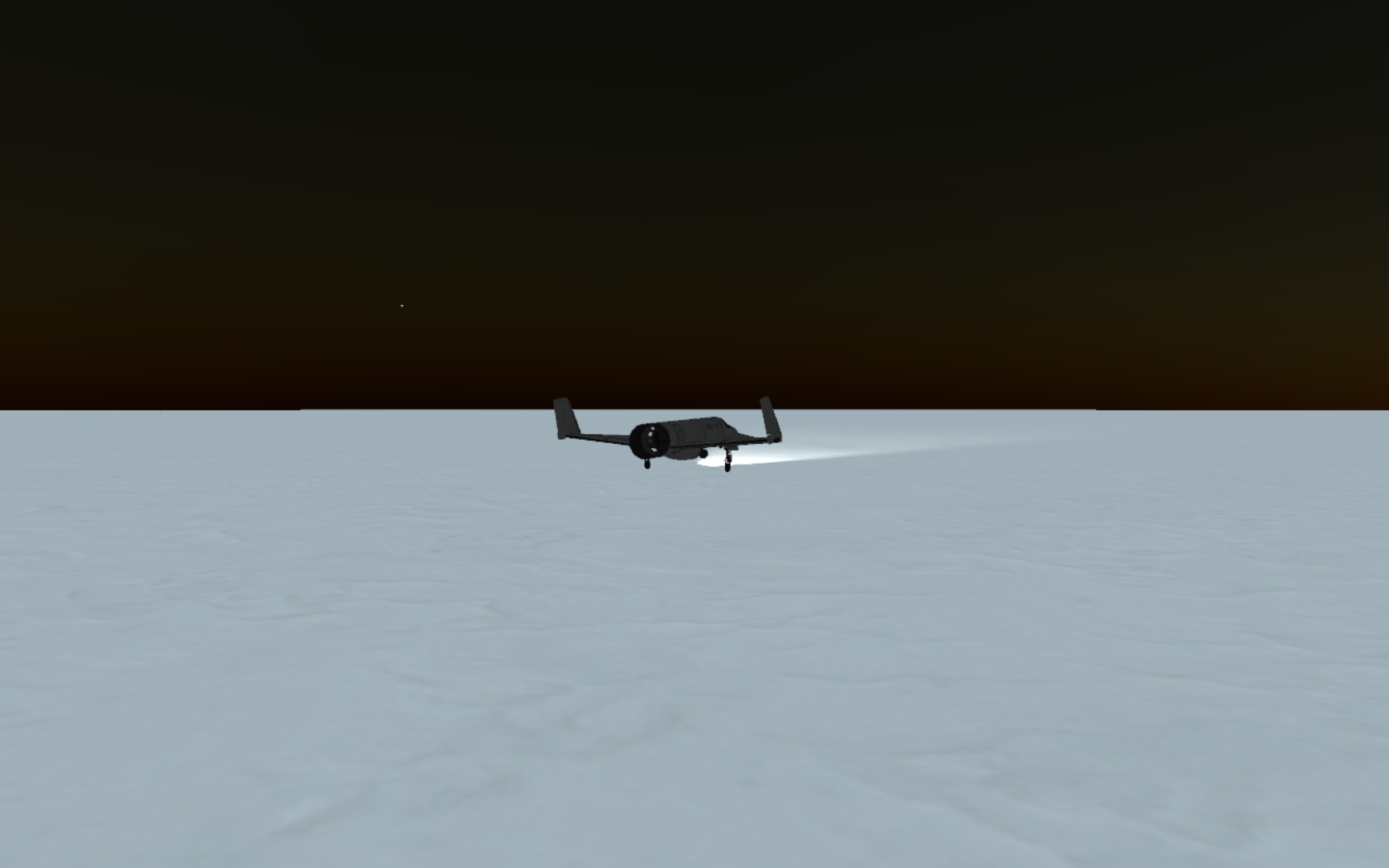 There was a new DLC released recently ("Breaking Ground") and I was surprised to see that I had all the DLC already, probably because I bought the game long ago (before it was on Steam) and just get the new ones for free.

So, I've picked up a new career as tends to happen when I resume playing after a while. 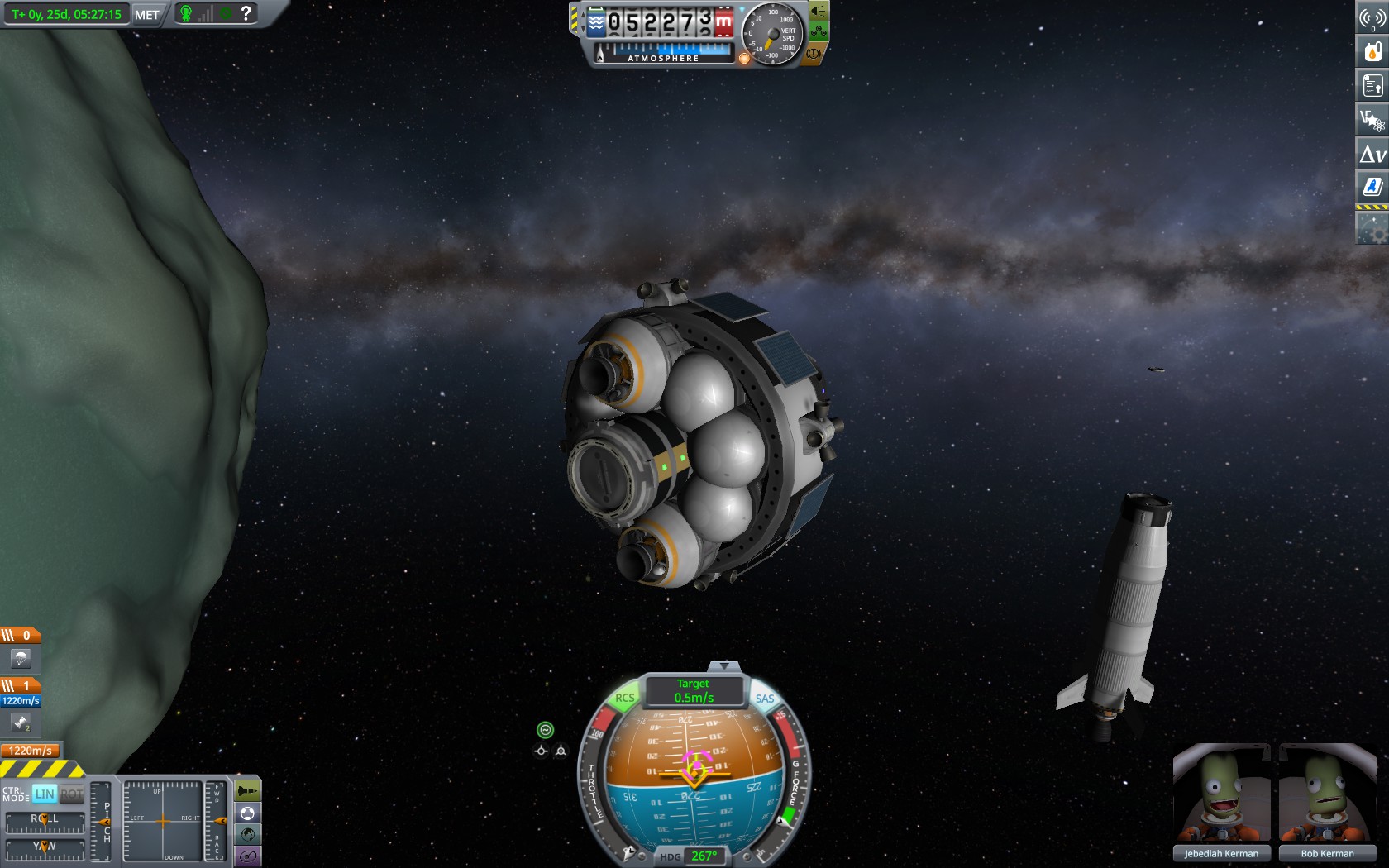 Here we see Jeb and Bob venturing to the first-ever manned landing on another celestial body (Minmus, because I semi-randomly bypassed the Mun), with their launch vehicle sliding away in the background. I had a contract to dock vessels and generally explore Minmus, so they're docking with the lander here. I launched the lander and crew separately to meet in Minmus orbit, because it seemed simpler (smaller, easier to control rockets) and was an easy way to fulfill the rendezvous mission.

These ended up having lots of spare ∆v; I had to abandon the crew launcher with fuel left in it to access the docking port, and the lander made it to the surface on its second stage launcher which left all of the deorbit/landing fuel in the third stage for hopping around on the surface to get more biomes for science instead.

They returned to Kerbin two weeks or so later (man, Minmus transfers are very slow) with 2200 science stuffed in the command module.
タリ · · Ask questions the smart way · · ツイッター
↑
Quote

Alright so hear me out, Vall orbit to Pol orbit in under 450 m/s ΔV 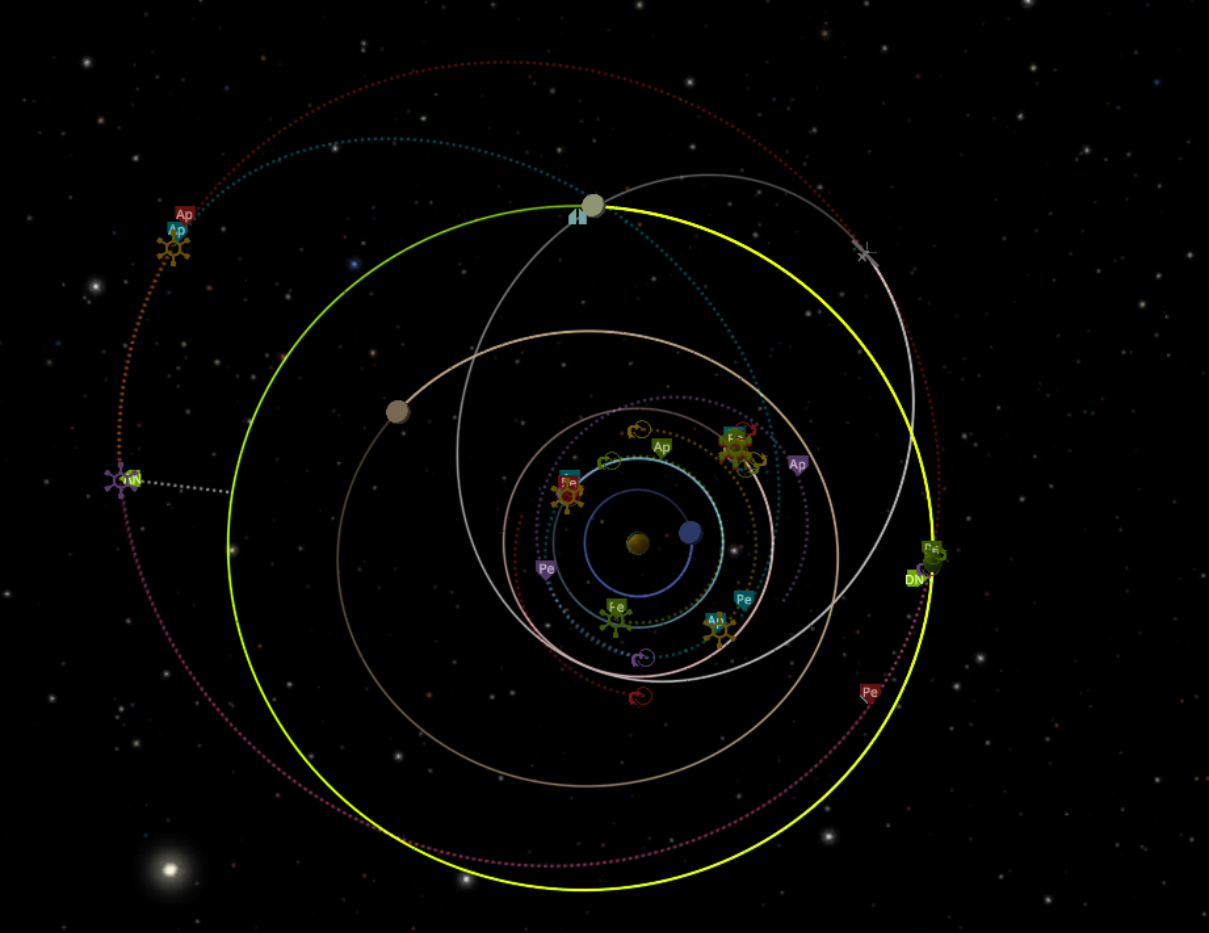 EDIT: The Jool system tends to give really nice views because of the many moons all near each-other. 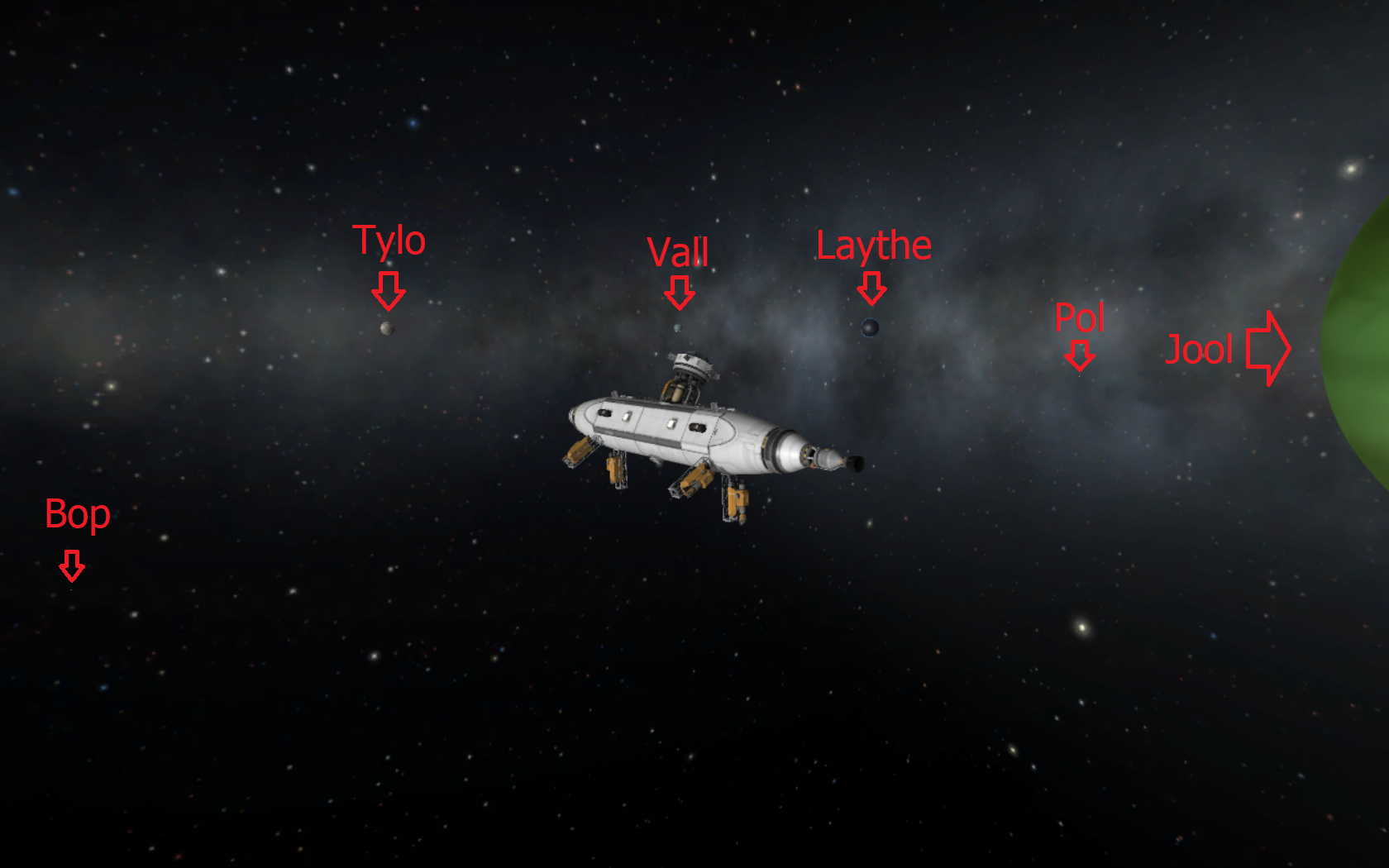 ↑
Quote
Register to Join the Conversation
Have your own thoughts to add to this or any other topic? Want to ask a question, offer a suggestion, share your own programs and projects, upload a file to the file archives, get help with calculator and computer programming, or simply chat with like-minded coders and tech and calculator enthusiasts via the site-wide AJAX SAX widget? Registration for a free Cemetech account only takes a minute.